At 37Signals, it makes perfect sense for us to put countless hours into Ruby on Rails because these are the tools we use to build a business. But if we didn't have a business, that effort would make no sense at all. The problem arises when the charitable philosophy of the open source world “⁠bleeds⁠”⁠ into the profit-oriented commercial world. Because at the end of the day, everybody has to eat―and just giving away your talents will not magically make that happen.

When you want to contribute to open source, you need to overcome your shyness and your fears of getting laughed at. You don't want to feel you can't make your point because you don't have a sufficient enough command of the language. I have my own scars to prove that. I'm not only a self-taught programmer, but I never studied English at school either, and I find that the language issue kicks in every single time. And of course, we Europeans do have a bit of national pride. We don't want to speak English―we want to speak our own language.

I loved Basic. It's a wise language, and most people don't give it respect. When I went to college and started picking up C, a part of me died.

We have essentially been doing application development using languages based on C/C++ for about 30 years. And that's crazy. The whole Java syntax is based around a language originally created to build an operating system. I think that languages have a shelf life. The Java Virtual Machine is fantastic, and there are some interesting things happening there now. But for applications development, maybe we should never have been using Java in the first place.

The thing that made Ruby interesting and fun for me is how well it integrated existing stuff--like Ruby's object model, which is very much like Smalltalk's. Matz himself is a language nut, and he produced a Frankenstein of a language that brought stuff in from other places. The genius of Matz is that he took these disparate sources and wove them into something useful. I don't know if you can imagine two more unalike languages than Perl and Smalltalk. Yet somehow, he married them, and their kid came out looking pretty decent. That takes a lot of skill.

A lot of the things I work on don't need the efficiencies that come from coding at that level. But I really value that I used C for six months. The experience made me cognizant of data structures and optimization in every high-level program that I write.

All this made me wonder why there isn't a more entrepreneurial Silicon Valley-type culture in Japan. There aren't many start-ups there; far fewer than here. I think start-ups require three things. You need a lot of creativity and engineering talent. Japan clearly has that in spades. You need a dedicated work ethic, to be able to put in 16 hours a day for a couple of years. Japan clearly has a ton of that: I've seen people there work crazy hours routinely. But the third thing you need is a good investment climate, where you might get $10 million for your idea to jump start your company. That's been missing: venture capitalists are much less active in Japan.

They say that in Japanese culture, nobody should stick out: that's how they create harmony. I personally think you should stick out, be the best you can be, and do everything that you dream: no matter how big it is, you should try. For all of the successes I have, I've fallen on my face ten times more. It doesn't stop me―it just makes me stronger. I learn from it. I think: how can I do this differently?

In very general terms, I'd say that the Japanese developers tend to be meticulous about how they think about every tiny detail of a project. They pay more attention to pre-planning on one hand and documentation on the other―whereas in India, we sometimes move on too quickly after we've got the basic functionality coded. Ideally, you want to do both: get the functionality, and spend the time to perfect it. That's a benefit we get when our Japanese developers visit our India office. They often stay for a month or two, enough to form a strong team with complementary skills. Another benefit of course is that our teams are thinking much more about internationalization. That's true for China, as well.

I think Japanese programmers probably like to put their absolutely best work out there. But that's not an open source value. We send code out all the time with notes attached saying “⁠I know this section is ugly, but it's just a placeholder.⁠”⁠ That approach is more conducive to having a conversation because the coding hours haven't yet been put in.

I gave a talk to Japanese entrepreneurs and investors, many of them young, who essentially asked: “⁠How do we reconcile this idea with the Japanese way?⁠”⁠ And I told them that I learned these ideas from the Toyota production system. And they looked at me like I was crazy--even crazier than the average American--because to them, the Japanese way was very bureaucratic, top-down, and non-innovative. They felt that these companies, including Toyota, had lost the agility of their earlier years. And that's classic behavior of general management--when you get good at something, you tend to become fixated on doing it better and better.

There's a story about a government auditor who wanted to weigh everything associated with the early Arpanet, which evolved into the Internet. He asked Bob Taylor, who headed the effort, how much the software weighed. Taylor told him it didn't weigh anything--it had no physical existence. The auditor came back a week later reporting that he had found rooms full of boxes of punch cards--and they collectively weighed tons. Taylor said yes, but the software is in the holes.

Many young filmmakers and authors spend a huge amount of time looking into the past and even referencing older works. But if you go to an academic computer science program you learn almost nothing about what came before. When it comes to networked information, our memories are short.

The Internet is like electricity. It started with one light bulb--or in our case--two hosts, UCLA and SRI. And now the whole world is lit.

I have trouble thinking about what the future is going to be or drawing too many generalizations from the past. I'm more interested in what interesting projects we can do now. I think a good project is like a good story: there should be some conflict, some obstacles to overcome, some unexpected plot twists and turns, and some unexpected results.

You want to be able to solve the problems that you face, but carry as little baggage as you need to do it. I think that's an effective way to live life. 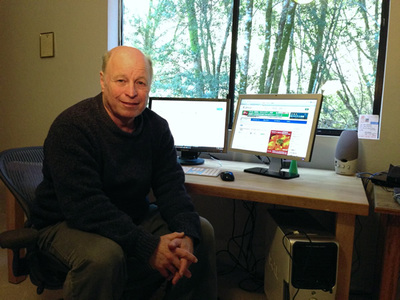 Note）
The job titles listed here are of the time the interviews were conducted.