According to Phil Libin⁠’s biography, “⁠he was born in Saint Petersburg, Russia in 1972 and did nothing noteworthy until his parents moved to New York eight years later. He is fluent in English and speaks Russian like an eight year old.”

Maybe so, but since then, Libin, who speaks English with just a trace of an accent, has made up for lost time.

A self-described “⁠black sheep⁠”⁠ in a family of classical musicians, Libin didn⁠’t quite graduate from Boston University, where he had studied computer science. But he still managed to co-found a couple of successful startup companies.The first, Engine 5, built e-commerce systems for large clients before being acquired for $26 million in 1999. The second, CoreStreet, began as a partnership with MIT cryptographer Silvio Micalil, and was acquired in 2009 for about $20 million. Libin is still on the board, but in 2007, he left to become the CEO of Evernote Corporation, a multi-platform cloud computing service that acts as a repository for anything you can write, sketch, photograph, record or pull off the Web.

As it would turn out, Japan would become Evernote⁠’s second largest market and a rich source for development partners. That⁠’s just fine with Libin, who has found a way to combine two passions: furthering Evernote⁠’s mission of “⁠building an external brain for the world,⁠”⁠ and food, including one of his favorite dishes: yakatori.

Why did you leave CoreStreet? Computer security and privacy are hot topics for both governments and the private sector.

“⁠CoreStreet was doing really well, but after six years learning the ins and outs of Department of Defense procurement, I was getting pretty bored. I wanted to work on something that a billion people could get excited about. I was thinking about memory augmentation―nobody is completely happy with the limits of their own brain. I put together a business plan, researched the market, then ran into Stepan Pachikov, a prominent Russian/American scientist and entrepreneur whose team developed the handwriting recognition software used by the Apple Newton. I was blown away by Stepan⁠’s vision and back-end technology―it was clear he had a head start. He was looking for a CEO to help turn the product into a technology. I had never headed a company someone else had started, but Stepan is a charismatic, persuasive guy, and he talked me into it.

What’s the relationship between the Newton and Evernote?

It⁠’s the idea in both cases that you always have something with you that makes you smarter―that makes sure you don⁠’t forget anything. The Newton was an early attempt at that. Evernote is the PDA several generations later. It⁠’s a service, in the cloud―and so you can access it on every device from laptop to phone. If you are going to create a true extension to the brain, the information has to be ubiquitous.

Evernote also supports the iPad. Where do you think it fits in?

After just two months on the market, the iPad represented about 20 percent of our network traffic. That⁠’s true even though we have versions for every smartphone. The iPad⁠’s coolness factor alone meant we wanted to support it immediately. But we had no idea it would get this big.

Why do you think it did? 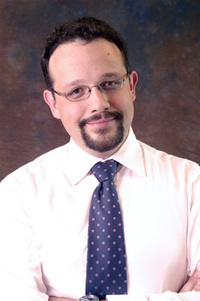 Because the user experience is so good. The iPad is so tactile and interactive. With Evernote, we wanted people to feel as if they were running their fingers though their memories. The iPad⁠’s UI actually makes that possible. And in a market where there⁠’s infinite consumer choice, user experience is often the key difference. I notice that if I want to do something that I expect will take less than a minute, I⁠’ll do it on my iPhone. If I expect something will take between a minute and say, 15 minutes, I go for the iPad. Beyond that, I reach for the laptop. My whole life has divided itself into those buckets.

How did Japan become your second largest market?

We didn⁠’t plan it. In fact, we had never even thought about going into Japan or launching there. On the other hand, many of us in the company really love Japanese culture. We all grew up watching Japanese anime on CD, reading Japanese comics and watching samurai movies. I think the Americanized version of Japanese pop culture is pretty firmly ingrained in Evernote as a company.

It was at the subconscious level. The night before we launched our private beta, I realized we didn⁠’t have anything explaining what it was. So at 3AM, I recorded a five minute video that we posted on YouTube and linked to our site. It was just a screencast where I showed some examples of how you can use the service. A few months ago, I took another look and realized that most of those use cases had something to do with Japan. The very first thing is about shopping for t-shirts with pictures of ninjas on them. The second use case is about recognizing bottles of sake. The third is buying plane tickets to Tokyo. We did this, even though our audience was American―we had no Japanese localized version.

Then we started realizing that Evernote⁠’s usage in Japan kept growing and growing. So we went over there, met with some bloggers, took some people to dinner, and had a good time. Then we started getting mentioned in the press and on TV. There are now six books on Evernote in Japanese. We asked users to help us with the localization by sending in handwriting and text samples, and got a big outpouring of help from the community. Our Japanese version officially launched last spring, and Japan is our second biggest market by far: 57 percent of our users are in the U.S.,18 percent are in Japan. The next biggest country is Spain at 4 percent.

Japanese pop culture is a big influence here in the U.S. But aside from these use cases, why did Evernote gain traction in Japan?

My theory is that Japan is a big collector culture―people collect not just things but ideas―and Evernote speaks directly to that. A lot of people I⁠’ve met in Japan record things, write things down, and keep track of stuff. I⁠’ve always taken pictures of food. In restaurants, everyone would always stare at me. But in Japan, everyone does it. Those pictures can all go into Evernote: it⁠’s a great use case.

Also, our positioning resonates well in Japan because the service is aimed at substantive, interesting, brainy users. Those people are everywhere in the world, but I think there is a higher concentration in Japan. I think of Evernote as the other half of your life. Your social life has been pretty well represented by new companies over the five years―Twitter and Facebook and Mixi in Japan. The other half is your informational half―the stuff that you do, not for your friends, but for you. There aren⁠’t very many companies that are firmly entrenched in this informational half of your life. That⁠’s where Evernote is at. It⁠’s for people who are substantive, who have something on their minds, who have interesting hobbies or projects or work or school.

Did your sense of Japan change as you’ve visited it.

I⁠’ve been to Japan a couple of times because I like it so much, so I was somewhat familiar with the country. But I never really had friends or deep contacts there. That⁠’s what⁠’s changed: I feel I can experience Japan a bit more as a local might. That makes it a lot more fun.

That’s been my experience in Japan, as well. It’s a really fun place to visit, but even more so when you know people.

I love being in Japan. I love the food. And I⁠’ve seen a lot of creativity in Japan, a lot of engineering and software development talent. More than half of our partners right now are Japanese companies. These are people or companies that are writing and creating products that integrate with Evernote using our API. We see all of these fantastic examples of new projects developed by Japanese companies, from two-man shops in Hokkaido to multi-national corporations like Sony and Fujitsu. One big surprise for me has been in dealing with Japanese companies. I imagined that we would have to have endless meetings to reach a common understanding. But that hasn⁠’t been my experience at all. We⁠’ve done more deals with Japanese companies, big and small, than we have done with American companies―which is completely unexpected. There are fewer lawyers in Japan, so probably it⁠’s easier to sign contracts.

You introduced the API about a year ago. What have Japanese developers been doing with it?

All of our scanner-related stuff came out of Japan first. We⁠’ve also seen several cool apps for taking notes faster, for doing mind mapping: creating diagrams that sketch out thoughts surrounding an idea. There are some teams in Japan working on memory training games that use Evernote.

All this made me wonder why there isn⁠’t there a more entrepreneurial Silicon Valley- type culture in Japan. There aren⁠’t many start-ups there; far fewer than here. I think start-ups require three things. You need a lot of creativity and engineering talent. Japan clearly has that in spades. You need a dedicated work ethic, to be able to put in 16 hours a day for a couple of years. Japan clearly has a ton of that: I⁠’ve seen people there work crazy hours routinely. But the third thing you need is a good investment climate, where you might get $10 million for your idea to jump start your company. That⁠’s been missing: venture capitalists are much less active in Japan.

Does that still matter? Your first company, Engine 5, started with no outside investment.

It⁠’s definitely changing―especially because of the iPad, iPhone and Android devices. You don⁠’t need $10 million any more. You can make a great app with one or two people. You don⁠’t need to spend a ton on marketing and on sales. You don⁠’t need to worry about sales channels or logistics. The software world is much more a meritocracy now than it has ever been: the best technology, the best products are much more likely to succeed on their own merits today than they were five years ago. In this emerging world, I think Japan has much offer. So I⁠’m expecting that we⁠’ll see a lot more coming out of the Japanese entrepreneurial class over the next year or two.

And more good things coming out of Japanese kitchens?

Japanese cuisine is my favorite cuisine―and I⁠’m really interested in food. Japan is the only country I can be in for three weeks at a time and I not even think of eating anything else.