As a student at the University of Florida, Greg Gopman took six-hour bus rides to visit home. Getting there wasn’t half the fun: there were surly drivers, broken air conditioners, and general disorganization. Gopman thought he could do it better, and so after graduating at the age of 22, he launched Weekend Gator, an online bus ticketing service geared for students. For the young entrepreneur, the experience became a harsh but invigorating introduction to the world of startups: he miscalculated call volumes, had business partners back out, and battled with competitors. On the cusp of success with a university contract, he was ultimately forced to sell the company to his vendors. 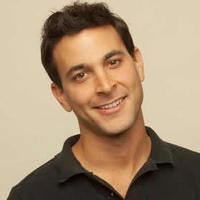 But along the way, Gopman took a liking for technology and technologists--as well as the very process of creating and marketing a startup. So he packed his bags and moved to the center of the coding action: the San Francisco Bay Area. Here, he launched AngelHack, a hackathon now in its second year that is aimed at garnering attention, connections and cash for promising software developers. The core feature is a 24-hour coding marathon fueled by competitive adrenalin.

I spoke with Gopman in mid-June just ahead of AngelHack Summer 12, now a four-city event (Palo Alto, New York, Boston and Seattle) with some $200,000 worth of prizes at stake. His sponsors include Facebook, Windows Azure, Google, and Samsung Developers. Regional finalists get a paid trip to the Silicon Valley, a tour of the Googleplex, and business mentoring.

How did you first get involved with hackathons?

When I moved to San Francisco, I didn’t have any contacts into the tech and developer culture, so I started going to hackathons, which seemed to be at the epicenter of that world. I fell in love with the vibe. It reminded me of a slumber party you might have had as a kid, except it was focused around building things and creativity. I went to Facebook’s hackathon, TechCrunch’s hackathon, Startup Weekend. I did the tour.

What were you looking for?

I wanted to work with developers, to figure out how to be a better business partner with them, how to better collaborate. I saw hackathons as a quick way to bond and form relationships.

There are plenty of events where would-be entrepreneurs make presentations to investors. What’s the advantage of putting a hackathon at the front end of this process?

The entire tech world works around developers, so if you don’t have a developer-centered event, it really isn’t going to fly. That’s how the hackathon took front and center. It needed to be the core. The business aspects that come after make the whole event more interesting.

The hackathon also serves to level the playing field for developers. That was important from my own experience: coming into the [Silicon] Valley without having any contacts, I empathized with developers facing the same challenge. There is so much noise now with so many people competing for attention that I wanted an event that got people above it. I wanted them to have the sense of: “⁠I know I’m special. I haven’t been discovered yet, but that’s just a matter of time.⁠”⁠ With AngelHack, developers can spend a couple of days showcasing themselves to the investor community with the possibility of actually getting noticed.

At the event, do people usually come as preformed groups with their own ideas?

Some do. Others meet people there. Some people have ideas when they come in and some of those may have been working on those ideas for weeks. Others may have absolutely no idea what they want to do; they figure it out on the spot. And the projects themselves vary all over the place. We’ve seen developers from large companies working on sophisticated security software. We’ve seen people come in with an amazing algorithm, then use the time to build an application around it. We’ve seen people create entire store platforms from the ground up. It’s pretty much a constant that people stay within their expertise: the technology and markets they understand. But it’s often the case that they don’t quite know what they’re going to build until they get going.

Does that mean that all the ideas are up for grabs?

Pretty much, and we allocate time for people to figure that out ahead of the hackathon, with three hours reserved for networking and pitching. Of course, if you already know what you want to do, you can just have lunch, come in at 2PM, and start coding.

The event goes from 2PM to 2PM the following day. What is the atmosphere like for those 24 hours?

It’s jovial--a combination of hacking and socializing. There are very few events out there like it. People are building things, creating applications right on the spot. They are working creatively, in teams, in a marathon setting. And in between, of course, people are eating and chatting over coffee. You definitely meet people in this environment--people are definitely interested in that. And what better way than at a sleepover party with people you don’t know? At the same time there’s the inevitably competitive dynamic.

What kinds of developers tend to come?

Typically, they’re between the ages of 20 and 32. Their experience level varies. A lot of people have day jobs, but others are working on startups, while supporting themselves doing freelance work.

Last year, AngelHack was strictly a Silicon Valley event. Now you are doing this in four cities simultaneously.

Yes, and now we are now learning how to scale. Every location has its own challenges.

Palo Alto, Boston and Seattle are known as technology centers. But New York is more of a surprise.

We’ve sold 500 tickets in New York; 650 tickets in the Silicon Valley. Those numbers trump the other two. Boston’s ecosystem centers more around the college students than entrepreneurs. Seattle with Microsoft and Amazon is a larger ecosystem for startups. But New York is a monster. It feels like the Silicon Valley did ten years ago. The reason is all about the money in New York. Now that the financial sector has become more regulated, startups seem to be where everything is blossoming.

Will AngelHack travel overseas? What about Japan?

We would love to be in Japan. If we expand after this one, if we feel comfortable expanding further, the cities we will go to are Toronto and Tel Aviv, Tokyo and London. We’re looking for event organizers: if any of your readers are interested, please let us know.

What development platforms do people bring?

Ruby and Python are the cool kids⁠’⁠ way to code, and they like building on Heroku and Amazon EC2. The more experienced developers will play around with Rackspace and Azure, but both aren't that well known in hackathons. We’ve seen Python used for algorithms and data analytics, PHP for fast coding, and of course .NET for Microsoft work. By the way, Microsoft has retooled Azure and is relaunching it at our event, and I think that’s an important function for hackathons, in general. Azure hasn’t been used much in the startup culture, and Microsoft is hoping the platform gets a second look. It will be interesting to see how that works. [Azure wound up being used by some 50 teams at AngelHack.]

The winners for this first round then get advice.

We call it an incubator, but really it’s more of a mentorship. We pair the winners up with mentors from around the country who try to help them out with ideas and offer them guidance. This happens largely over phone calls or dinners and drinks. We’ve added this since last year: last year we didn’t have this step, and we felt that some promising ideas didn’t make it to the next step. So we see mentoring as a way to get people over the hump, so that their talent and enthusiasm aren’t defeated by the inevitable business challenges.

You have an interesting relationship with TechCrunch and its hackathon. You’ve said that TechCrunch actually inspired you to build a better hackathon. This year, two TechCrunch contributors are among your judges.

Yeah--last year, I was the new kid on the block and they were the 800 pound gorilla: they still have the largest hackathon in the world. Since then, I think we’ve accomplished what we’ve set out to do with AngelHack and so we’ve evolved into a collaboration. We’re on good terms with TechCrunch now and are happy they will be there.

It seems that hackathons are everywhere you look. From your perspective, why have they multiplied?

I think the core attraction is that many developers love going out and working with other people and networking. Hackathons are a good a way to spend the weekend, hang out with friends, sometimes do a sleepover party, eat and drink pretty well, and also learn and build new things. Plus, many of these events are free. That’s especially true for hackathons centered on a company’s development tools, which by nature take a deep dive to evaluate. These kinds of hackathons are good for the tools manufacturer, good for the developers. They represent a very symbiotic relationship.

Is that true for AngelHack, as well? A symbiotic relationship between developers and potential investors?

Well, at the top tier of investing--people like Google Ventures--there is no lack of developers knocking on their doors. Of course, there are exceptions. In New York, venture capitalist Charlie O'Donnell is infamous for still hanging out at co-work spaces to find startups, and he does a really great job of finding diamonds in the rough. So does Jeff Tannenbaum of BlueRun Ventures and Thomas Korte in San Francisco. But very few investors do that anymore. Most of them hide in their office and wait for deals to come to them, or wait for interest. They are not part of the actual coding--the startup part of the culture.

So where does AngelHack fit in?

I think AngelHack fits in with an emerging side of the investment culture, the “⁠sprinkle and pray⁠”⁠ approach: sprinkle investments to a lot of companies knowing that in reality, most of them won’t work. It may take 53 investments to hit a single home run. I think we’re playing at that level. The winners are people who investors should pay attention to. And investors are saying: I see some potential, here’s some money for the time being--let’s talk again in a few months.

We’re really early stage angel investing. We have more than $200,000 in prizes. The first prize and second place is $25,000 in seed capital $60,000 in hosting services, enough to last a typical startup for about half a year, enabling them to work at full time and still go out and kick some butt. 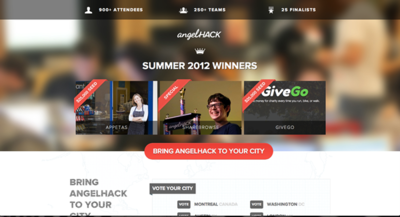